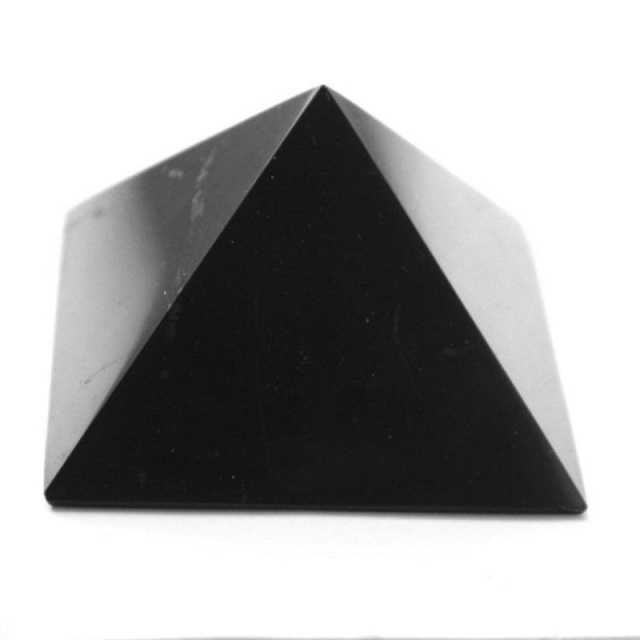 Shungite pyramids are the most popular shungite items. The pyramidal shape is known for its properties that have a positive influence on everything that surrounds it. Apart from being one of the most effective tools against negative electromagnetic frequency (EMF) radiation and geopathic stress, shungite pyramids provide a positive energy.

Place the pyramid on a mirror plate and you also create the dual form of the octahedron!

A 5 x 5 cm pyramid generates a field of influence that extends for 13 feet around it. Place near wifi routers and electrical devices for optimum neutralisation of the negative EMF's.

Shungite pyramid and other items appear to be a perfect solution when it comes to coping with geopathic stress. Geopathic stress is a distortion or disruption in th electromagnetic field of the Earth (Schumann Resonance / Waves - 7.83Hz ). Many things like underground streams, sewers, water pipes, electricity networks, tunnels and underground railways, mineral formations and geological faults distort the natural resonance of the Earth and lead to the creation of geopathic stress (GS). People sleeping or spending a lot of time in geopathic stress zones are very vulnerable and their health, performance, and well-being are affected by the negative influence of such zones.

Sold out
Add to Cart
ABOUT SHUNGITE

Shungite is a unique Precambrian carbonaceous natural mineral of organic origin that can be found in its raw form only in the Republic of Karelia, the Russian Federation, where the only deposit of this fascinating mineral is located. The stone received its name from the name of a small village called Shunga where it was first discovered.

Shungite is often referred to as a 'magical' stone, a stone of life or a healing mineral due to its multiple healing, curative and protective properties that go back far more than several generations. Some experts claim that the mineral is approximately 2 billion years old and it starts its existence long before life existed on Earth.

Shungite is widely used in various fields including the metallurgical and chemical industries, agriculture, medicine, and complementary health. The popular properties of shungite that have brought it to the world's attention are water purification, physical and spiritual healing, and protection against electromagnetic frequency (EMF) radiation - a common concern in today's world.

The mineral has a unique structure consisting of fullerenes, which is a crystalline modification of carbon. Fullerenes are considered   powerful antioxidants that protect the cells of the human body from the damaging effects of free radicals. The spherical fullerene molecules contained in the shungite carbon also make it extremely useful in cosmetic medicine and beauty culture.

Shungite is capable of reducing the effects of EMF radiation, neutralizing geopathic stress and tension, activating healing properties of the human body and providing physical and spiritual healing. All these properties contribute to the fact that this stone has become more and more popular in recent years.